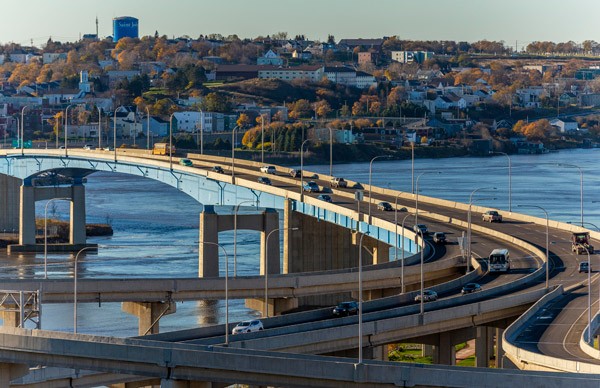 DTI has been advised that due to the rain forecasted for the next few days, paving on the Saint John Harbour Bridge has been delayed until Sunday, November 27.

The closures will allow for asphalt trucks to pass through to the site. Flaggers will be on site conducting traffic control during this time.

Recent weather has created additional delays for paving on the east end of the bridge, which is now planned for the week of December 5.

Plans to move the barriers and line painting will follow after the paving has been completed. This will conclude work ahead of the winter season. The bridge is scheduled to re-open to full traffic on December 16, 2022.

The Saint John Harbour Bridge Rehabilitation Project will take place from 2021 to 2026. The $26.4 million project is broken down into four phases:

To complete the multiphase work, the bridge will be reduced to two lanes from early April until late November annually during Phases 1 to 3.

There will also be intermittent 15-minute closures twice per week during off-peak commuter hours to jack the bridge for replacement of bearings. The bridge will be closed to all traffic with the exception of emergency vehicles. Delays are expected, check NB 511 for updates.

Click on the image to see a larger version.

Safety requirements are in effect for operators of private trucks working on provincial highway projects and contracts.